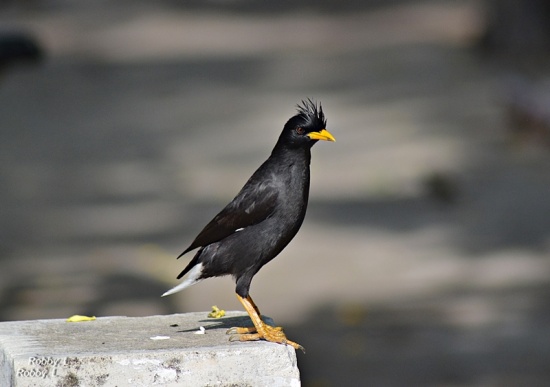 Sexes similar. Juveniles are duller and browner, have a short frontal crest, a spotted appearance and buffy undertail-coverts. 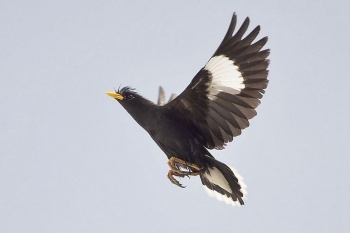 Photo by prapas
Sumtprakarn, Thailand, May 2009

Crested Myna has a yellow to orange eye and no white undertail-coverts, Javan Myna has a pale-yellow eye. Jungle Myna is more greyish, has a bluish bill base and yellow eyes.

From northeast India east to southeast Bangladesh, Burma, southeern China (Yunnan, Guangxi), Thailand and Indochina (Laos, Cambodia, Vietnam).
Common in most of its range. May expand its range on the Malay Peninsula.

This is a monotypic species.

This taxon has been involved in several rounds of splitting and has been considered conspecific with Jungle Myna and Javan Myna.

Open country like cultivated areas, rice paddies, parks, gardens, grassland and marshes. Occurs from the lowlands up to 1520m.

Feeds mainly on insects. Takes also other invertebrates, seeds and berries.
Forages on the ground, mostly in pairs. Often near cattle and buffalos.

Breeding season from April to August. The untidy nest is placed in a tree hole or in a palm crown, sometimes in disused Bee-eater burrows. Lays 4 - 6 eggs.

Search for photos of Great Myna in the gallery