3'290'000 km2, 1'150'000'000 people, over 200 languages, sandy beaches, dry deserts, the wettest place on earth, the mighty Himalayas, paddyfields, rainforest, savannas, huge wetlands, tigers, temples and last but not least some 1000 species of birds: That's India.
India has a large diversity of habitats and covers a vast area. Not surprisingly it has a long bird list. Being a country with a high proportion of Hindus, many people are vegetarians and the animals have not been subjected to as much direct persecution as in other places. The result is that birds can be very approachable.

About 1220 species have been recorded, meaning about 12% of all birds worldwide. Most birds are Oriental but there is also a Palearctic Element, mainly in the North.
Some endemic species can be found in the Western Ghats, the Andaman and Nicobar Islands and in South India in general. Many birds are near-endemic and can also be found in Nepal, Bhutan, Bangladesh or Pakistan.
In the last years some amazing discoveries and rediscoveries have been made: The Bugun Liocichla has been described in 2006 after its discovery in 1995. In 1986 Jerdon's Courser was rediscovered in South India, not been seen since 100 years. And 1997 the Forest Owlet was relocated in Central India. 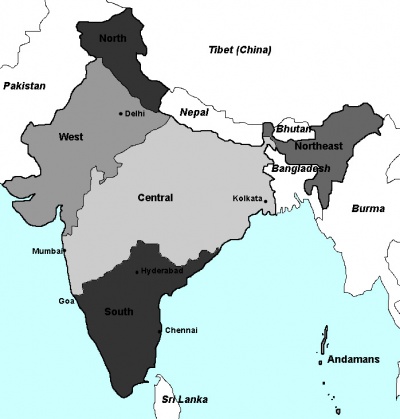 For easier use India is divided in six regions here:

North India
The northwestern, mountainous part. Includes the states of

West India
The western part, including many well known places like Keoladeo National Park. Includes the states of

Central India
Including the lower Ganges valley and the northern parts of the Deccan plateau. Includes the states of

South India
The southern tip of the subcontinent, including the states of

Northeast India
The northeastern part including the mountainous part of West Bengal. Includes the states of 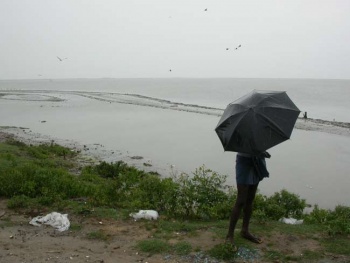 Photo by Wintibird
Birding in the monsoon

Birding in India is generally easy. Most people speak English, there is public transport virtually anywhere and also taxis for long distances are affordable for foreign travellers. For all Reserves and National Parks Permits are needed which can usually be obtained on spot. Travelling to Arunanchal Pradesh and the Andamans you will need a special permit, sometimes only to get if you are travelling organised. The Nicobar Islands can not be visited.
In some parts of the country the political situation is unstable, eg. Kashmir, the eastern States and some remote parts in the Centre or the South. Check before you go and be careful. Usually tourists are not harmed.
There are many Indian tour companies who organise birdwatching trips. They are affordable and birding with a guide is usually much better than on your own.
Hotels are found in every bigger place, ranging from posh five-star things which cost a fortune down to simple homestays.

The best birding season differs through the country. Bear in mind that during the monsoon (which differs also in time) many roads and rail tracks may be blocked and travelling gets very difficult.

Search for photos of India in the gallery

Search the Gallery for videos of India:

Search for photos of India in the gallery

This category has the following 5 subcategories, out of 5 total.

The following 58 pages are in this category, out of 58 total.