This section is aimed at explaining the bird and biology specific vocabulary you are likely to meet in other threads in Birdforum.

Machair: a Gaelic word describing a habitat rarely found outside of the Western Islands of Scotland and in Ireland. It consists of low-lying grassland, rich in wild flowers growing on peat, covered with windblown sand and broken shells. This is one of the rarest habitats in Europe and is important for breeding waders and wintering waterfowl.

Mandibles: the two parts of the bill/beak, if used in singular, most often as lower mandible; see also Beaks

Maxilla: another name for the upper mandible = the upper half of the bill.

Melanism, melanistic: an abnormality where there is darkening of all parts of a bird, both feathers and bare parts (bill and legs). The full version of melanism would produce a completely black bird. Eurasian Blackbird is not melanistic because it has a yellow eye ring and bill (and because the black plumage only occurs in the male anyway). The opposite of melanism is albinism. See also "Partial albinism" and "Leucism".

Migration: regular, usually seasonal movements that usually take a species between a breeding area and an area for passing a period of time that would be less hospitable in the breeding range. Such movements can be along a north-south direction in many parts of the world, but in the tropics there are plenty of examples where migration happens from higher breeding grounds to lower non-breeding areas, and a third possibility is regular movements driven by rainfall variation (a semi-desert that receives rainfall during a set time of the year can be a good breeding ground during and after that rainfall but inhospitable the rest of the year). See also Nomadism, nomadic. See reference 2 for more information.

Migratory navigation: plenty of stories exist about long distance migrants that return to the same breeding territory for two or more years. How birds do that is not fully known, but one common idea is that they have a migration program (inherited or learned) and that one important aspect of their navigation is the use of a compass. Three different compasses seem to exist and be used in birds: magnetic compass, solar compass, and a stellar compass; if one of these dominate and calibrate the other compasses is an area of active research and discussion[1]. The magnetic compass could be of a simple type that basically measures a north-south direction, or it could be a more advanced inclination compass that can measure how far below the horizon that the magnetic north is; it is still unknown how the birds sense this, but a location near or in the eyes for their sensory mechanism seems probable. The solar compass in addition to the obvious effects can rely on polarized light, because near sunset and sunrise (and to a lesser extent the rest of the day), there will be a band of increased light intensity going north-south over the sky if you are sensitive to polarized light, which at least some birds seems to be. The stellar compass is fairly simple in that the north star is a constant and the rest of the sky rotate relatively to that point (a similar argument can be made for the south pole of the night sky).

Mimicry: When one species looks or sounds very similar to another species and the effect is brought on by evolution and confers an advantage to one of the species (for example a non-poisonous species being similar to a poisonous species). One example in birds is host mimicry in the brood parasite Common Cuckoo in which lines ("races") of birds specialize in laying their eggs in nests from one host species and their eggs have developed similarities to the eggs of that species.

Monomorphic, monomorphism: strictly speaking, this means that all members of a population/subspecies/species belongs to the same morph (see below for that term). For example, the Whiskered Screech Owl subspecies aspergus which occurs in e.g., Arizona only occurs in a grey form, while the other two subspecies have both grey and red morphs. Monomorphic is also used with the modifier "sexual" to describe a species where male and female are quite similar looking, often in contrast to other similar species that show sexual dimorphism (compare Barbados Bullfinch to Lesser Antillean Bullfinch.

Morph: usually used about discrete, reproducible color variants that occur within the same population of a species; also known as color phase. Examples are plenty, such as dark and pale forms of Booted Eagle, many of the Screech Owls of the Americas occurring in grey, brown, and red forms, or in the pale vs dark bellied forms of Parasitic Jaeger. In many cases, the designation is used even if a few intermediate birds are known. Some resources will state that it is inappropriate to use the word morph if the variation is determined by sex, age, season, feather wear, etc. However, the form sexually dimorphic is often used to describe variation determined by the sex of the bird. See also monomorphic (above) and polymorphic 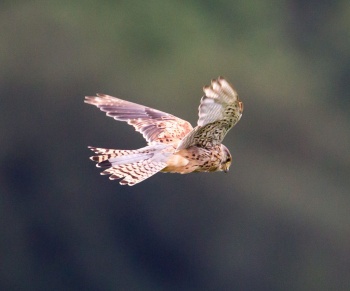 Example of moult where one central tail feather and several feathers in the wings have been replaced. The bird is moulting from juvenile to adult male plumage
Photo by Vernon Barker
Ogston Reservoir, UK, July 2016

Moult (US, Molt): the shedding of old, worn-out feathers and growth of new feathers. Understanding the progress and timing of moults is very important in determining the age, and sometimes the identity, of a bird; successive moults may bring in markedly differing plumage patterns and colours. Many birds have two moults per year, typically a complete moult (all feathers replaced) after breeding (in the late summer in temperate zones), and a partial moult (body feathers replaced, but not wing or tail feathers) before breeding (in the early spring in temperate zones). Some birds only have one moult per year, while others can have two full moults, or one full and two or more partial moults. A few birds, notably larger raptors and other large soaring birds, have more-or-less continuous slow wing moults, so as not to impair their flying ability. Occasionally, moult can be easily seen in the field, such as in the attached file. In some cases, it is even a useful part of the field marks for a bird. In the Common Tern, the upper side of the outer primaries are darker in summer than the inner primaries, because they are older.

Nares: in technical literature and especially about birds, this is frequently used for nostrils (see Beaks)

Nictating membrane: a third eye-lid that is a fully or partially transparent membrane which can be pulled across the eye from front to back. It tends to be fully transparent in diving birds, and they will use this to cover their eye when diving. Other birds may use this membrane to moisten the eye or to remove debris (to what degree such uses are assumed vs based on data is unclear). [1].

Nidicole, Nidicolous: A bird that is born naked and with closed eyes (so synonymous with Altricial). Nidicolous is the adjective of that.

Nidifuge, Nidifugous: nidifuge is a hatchling that is able to move around and most often feed itself (so synonymous with Precocial). Nidifugous is the adjective of that.

Nocturnal: a species that is active during the night. Many of these actually start their activity at dusk and may still be active at dawn (such as Barn Owl in the UK), while others are strictly nocturnal.

Nomadism, nomadic: birds of nomadic species make movements that are not regular (contra Migration) but are instead driven by irregular availability of food, for example following rare but strong rainfall such as occur in the Australian outback. Example species could be Princess Parrot and several others.

Nuchal: most usages refer to the rear of the neck, for example nuchal collar about a (half)collar around the rear neck (probably the most frequent use in birds). However, it can also refer to several bone lines at the rear base of the cranium, or to a crest on the nape. In medicine there are another couple of usages not relevant here.

Ocellus, Ocelli: Eye-like spot(s) such as those found in Indian Peafowl.

Omnivorous: eats several different kinds of food, for example both fruits and invertebrates.

Orbital ring: a ring around the eye consisting of naked skin, see Beaks. Some birds have a ring of differently coloured feathers around the eye, this is the eye-ring.